Claim the magic carrot to win the game. 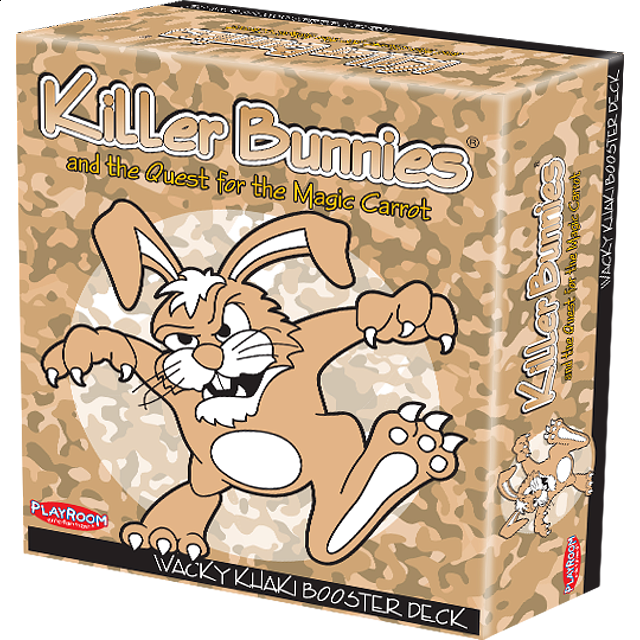 Killer Bunnies and the Quest for the Magic Carrot: Wacky Khaki Booster Deck is an expansion, not a stand-alone game. Have we increased the ranks of our military bunnies? Sir, yes sir! The Officer Rank cards have arrived starting with Ensign and rising all the way to Captain! The Killer Bunnies Quest for the Magic Carrot Wacky Khaki Booster Deck adds 55 cards to your existing set, a Highest Officer Rank card and 18 colored Chips. Other fantastic cards include: Army Of The 12 Bunnies which will hunt you down any hour of the day, Locked In which forces players to use their Top and Bottom Run cards and The Lonely Ranger who roams free! Can you avoid a crippling blow from Mad Bunny Disease, or psych-out your opponents with Truth or Hare! Why not seize the danish with Carpe Scriblita or move a weapon targeting your bunny to an opponent’s bunny with the help of the Sky Waitress? Grab one yourself or send a lacky, but don’t miss the next Booster Deck named Wacky Khaki! Players 2 – 8 Average Game Length: 45 Minutes Maker:  Playroom Entertainment Age:  13+ Collect other Killer Bunnies and the Quest for the Magic Carrot Booster Decks to add new cards to your existing set.  Each deck provides new levels of strategy to the game, allowing it to “grow” with the player, remaining fresh and fun. (Boosters available are: Red, Violet, Orange, Green, Twilight White, Stainless Steel, Perfectly Pink, Wacky Khaki, Ominous Onyx and Chocolate)